Summary: Solarworld is poised to go up – or down

Solarworld is a Germany-based photovoltaics module OEM with a deeply integrated value creation, starting from raw materials via cells to ready-to-install modules.

Their charismatic founder Frank Asbeck has taken them through periods of large successes, but also through times when the going got tough for Solarworld.

Compared to industry leaders as Trina Solar(TSL), Jinko Solar(JKS) or Canadian Solar(CSIQ), they have lost relevance in global market share rankings and rank below a global no. 10 in terms of GW delivered.

Solarworld has two key challenges that could finally lead to a bankruptcy or strong equity dilution:

Solarworld’s operations and profitability are seriously troubled due to

As a result of these conditions, the company has taken drastic measures to limit cash-outflow after moving away from their target to break-even on EBIT, e.g postponing interest payments on their company bonds.

[2] Legal case with Hemlock over a legacy supply contract

Solarworld is in an ongoing legal dispute with its supplier Hemlock over a long-term supply agreement for silicon. Hemlock has been filing claim for 770 million USD from Solarworld for not fulfilling contract obligations . In a first ruling, the court decided in favour of Hemlock, but Solarworld has appealed against this judgment and appears confident that the claim – even if a second instance confirms it – can not be enforced due to European anti-trust laws (p 7).

These threats have been severely impacting market capitalization in the past years: 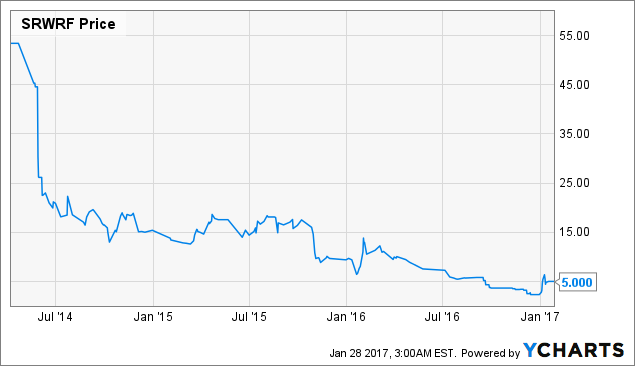 An investment strategy to benefit from either outcome

Given these boundary conditions, there are only two possible scenarios, with different probabilities.

Given the critical liquidity and profitability situation, Solarworld might be one of the first victim of the ongoing price war in the market. If they manage to survive the price war, they might still be killed by Hemlock getting their claim of 770 million USD enforced. Either way, the company will face bankruptcy or a dramatic equity dilution (e.g. through a debt-to-equity swap). As this will be the second time after 2014 that the company will try to escape bankruptcy, I see a strong likelihood that investors will not support this (again). In that case, the likely stock price will be <1 EUR.

Scenario 2: Rising from the ashes

In a second, less likely scenario, Solarworld manages to get away from Hemlocks claims or can get to an agreement that they are able to serve, and at the same time the price war will be countered by an effective set of actions which will make the company survive as a niche player that is able to generate an EBIT margin of maybe 5-7% on sales. In this case, the valuation would be around 15 EUR/share.

Digital option strategy: Winning on both ends (but not in the center)

I personally believe that in less than a year from now, either of the two scenarios will materialize – which means the company will not be stuck in the current valuation limbo, but either move strongly north or south. As I can’t tell in which direction the company will be going, I will design a long/short strategy and evaluate the expected outcomes with a probability model. 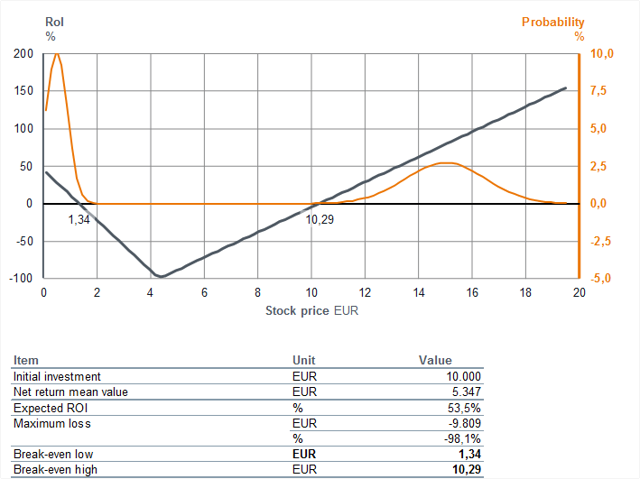 Source: Own calculation and illustration by the author

Assuming a split of call to put options of 1:2, both with a strike price of 4,40 EUR and a price volatility of 80%, the gray line in the chart below illustrates the Return on Investment depending on the share price on option expiry at December 15, 2017.

The strategy will break even if the share price is below 1.34 EUR or above 10.29. Combining the possible outcomes with the probability distribution, this investment strategy will yield an expected return of 53,5%. Maximum loss is close to 100% (if the options are not sold before expiry).

While this logic to bet on an „either-or“ outcome of a company’s future might appear very compelling, there are certain risks attached to it:

I have been running a comparable investment on Solarworld with options expiring in December 2016, and it finally delivered a return of >60% – but my hypotheses that the uncertainty would dissolve had been wrong, so it might have been a very lucky shot. While the bet was running, I had long periods where I was close to sell the positions at a strong loss because it was rather hard to bear. While researching for this analysis, I found that the volatility has even gone up since then, requiring an even more extreme outcome to break-even.

If you want to test out a digital strategy as outlined above, you should do so with a very tiny amount of money that you are willing to invest into your own learning curve. If you find another stock that is facing a similar a situation with a digital outcome, maybe you try it with that instead; happy to read comments for proposals on other stocks where such an approach could work out!